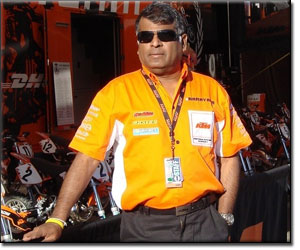 KTM North America’s Vice President of Racing and Event Promotions, Selvaraj Narayana, was presented with the Chairman’s Award by the Motorcycle Industry Council (MIC) this past Friday during the 2008 MIC Annual Meeting at the Hyatt Regency Hotel.

The award, presented by MIC Chairman Larry Little, recognized Narayana for his outstanding service to the board and the motorcycle industry as a whole over the past sixteen years that he has been a contributing member to the MIC.

In addition to his service on the Board of Directors, Narayana has over 30 years experience in the motorcycle industry including a long-term career with KTM.

Narayana’s commitment to the growth and betterment of the motorcycle industry has not gone unrecognized as he was also given the Vintage Iron Lifetime Achievement award back in 2001 which was presented to him by longtime friend and motorcycle legend Roger DeCoster.

Narayana was excited about receiving the unexpected award and commented, “It is an honor to receive this prestigious award from the MIC. My sincere appreciation goes out to the industry and the MIC Board for recognizing me for this honor. I will continue to work passionately to serve the motorcycle industry and I look forward to my involvement within the motorcycle community in the years to come.”