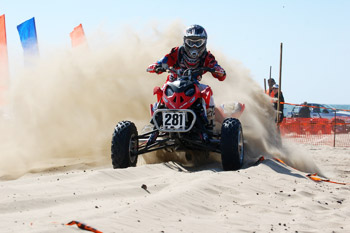 Endurance riding in the sand, which gets rougher and rougher and more whooped-out during the race, puts both the rider and the machine through a work out during this two-hour event.

Hurst pulled the holeshot on his 2008 Outlaw 450MXR, and with a roost of sand, he was gone. “My Outlaw was so strong in the rough sections, the FOX suspension was dialed, and my B&B Motor pulled hard through the power-robbing sand,” said Hurst.

He continued his flawless ride until lap number four, which he had to pit for fuel. “I knew I had to stop for fuel and didn’t want to take the chance of running dry, it was tough to watch my lead evaporate while I was pitted.”

With fuel in the tank, Hurst jumped at the opportunity to gain the lead while the leader was at fuel stop. Hurst led until the last fuel stop where he swap spots with the leader and finished a strong second.

Hurst will tackle the Competitive Edge MX Park track, in Hesperia, Calif., for the ITP QuadCross, on October 19.