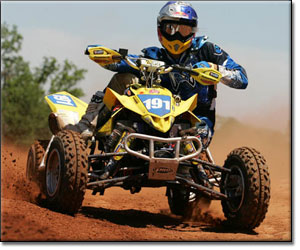 Maxxis riders took top spots in both premier classes at WPSA’s Round 3 in Stillwater, Oklahoma. In his first race aboard the new Razr Cross, designed for loamy conditions, Dustin Wimmer won the SuperQuad Pro 450 class.

Wimmer, who took the lead in the first lap of the final, told atvriders.com that he “tried to run a good race, and I relied on my mechanic to let me know where I was in the field. You try not to look behind you, but sometimes it’s difficult not to.”

Borich took the holeshot in the QuadTerrain Pro Stock final and held the lead throughout the race. “I just went out, and had some fun out there…My goal was to avoid getting hung up and keep my momentum. It worked out today,” he told atvriders.com. Borich is riding high this season: he’s currently first in the race for the GNCC overall championship.

In amateur races, Canadian Greg Gee took home another first place in the SuperQuad Pro Am class, while Angela Butler continues her total domination of the Women’s A class.

Maxxis also sends special thanks to John Natalie, who cemented his “Ironman” moniker by battling through serious chest and knee injuries, and to Keith Little for turning in a fine ride and proving yet again that Maxxis is the holeshot master.

Maxxis thanks all of its riders for their hard work and fine performances.