Maxxis Sweeps Top 6 at WPSA Round 2 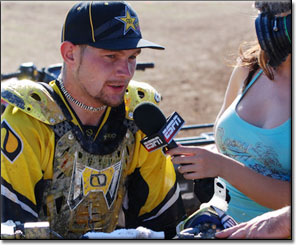 In a clean sweep of the top six, riders on Maxxis dominated WPSA’s Round 2, held May 12-13 in Taylorville, Illinois.

Wimmer, who finished a strong second in Sunday’s main event, turned in strong performances throughout the weekend, capturing the holeshot and the win in Saturday’s second heat.

Doug Gust also did well, taking third place in the main after grabbing the holeshot – his third great start of the weekend. The remaining spots in the overall top six were taken by, in order, Lost Creek/Suzuki’s Joe Haavisto, Suzuki privateer Russell Shumaker, and Lonestar/Honda’s Keith Little.

Scott Kilby took the victory in the Quad Terrain Challenge. Piloting a Maxxis-shod Warnert Racing Can-Am, he grabbed the holeshot and never looked back, while teammate Adam Vaughn rode Bighorns to second place.

In other action, reigning champ Angela Butler continues to dominate the Women’s A class with a streak of moto wins spanning the lifetime of the WPSA series.

Maxxis congratulates Chad Wienen, Scott Kilby, and Angela Butler on their victories and thanks all its sponsored riders for their fine performances.

Dirt Trax Onlinehttps://www.atvmag.com
Check back frequently for new content and follow us on social media!
Previous articleHas There Been A 700 Shootout?
Next articleKYMCO MONGOOSE 250