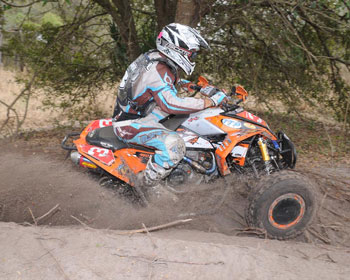 Factory rider Adam McGill finished 3rd overall in the first round of the ATV GNCC Series.

McGill started around 5th and spent the first lap catching the top three riders. He eventually caught up to the pack and passed his way up through to the lead position.

Once he was in first he held the position for one lap until he took on unexpected crash which lost him time. He recovered and started to catch back up to the front runners until realizing that his crash had caused damage to his machine which would cause him to return to the pits.

Once in the pits his mechanics worked vigorously to quickly fix the mechanical problems. When he reentered the track he was 4th and with two laps to go he moved back up to 3rd. “I wish I could have taken the win but after my crash and long pit stop I am just happy I made it to the podium,” stated McGill.

FRE/KTM Factory rider Josh Kirkland, in the XC2 Pro Am class, rode a solid race taking the first win of the season aboard his brand new KTM. Kirkland started around 3rd and in a smooth and consistent race he was able to easily move past the other rides to take the lead and the win. KTM support rider, David Crane, finished 2nd overall.

The final member of the team, Angel Atwell, had the same result as Kirkland in the Women’s Pro morning race when she took the win with over a minute lead on the rest of the field. “I had a great time today and I hope to continue these results through the remainder of the series,” commented Atwell.