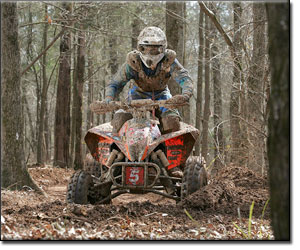 “It feels great,” said McGill. “This is the machine I wanted to race the first time I saw it. I was a little worried on the last lap, because I’ve been there before and it hasn’t worked out. I would get to sections, and it was just unbelievable, just like a bomb went off. There were people everywhere! I’m so glad there were people out there helping, and everyone at KTM, the whole team, I can’t thank them enough.”

Better yet for KTM, McGill’s teammate Taylor Kiser finished second to make it a KTM sweep.

Kiser’s XC1 runner-up finish came after a big battle.”I didn’t get a good start but I was able to work my way through,” said Kiser. “I feel good now. The sky’s the limit for this team.”

“There were a lot of lines out there and that definitely made it tough,” said Sommers. “Taylor and I hooked up and we really got into a good rhythm out there. On the last lap, I was ahead of him, but I got some water under my goggles, and I had to get rid of them. I was hoping he wouldn’t see it, but I guess he did because he started working to get around me and once he did there was nothing I could do.”

The championship chase took a dramatic turn when both title favorites–GNCC Champion Bill Ballance and runner-up Chris Borich–failed to finish due to mechanic troubles.

Ballance ran into electrical problems in his first-ever DNF in four years on a Yamaha. Borich snapped a chain on his Rockstar/Yoshimura Suzuki.

The third-placed rider in last year’s chase, Warnert Racing Can-Am’s Chris Bithell, was in the battle with Kiser and Sommers until getting stuck in the deep ruts in a bottleneck, and by the time he had dug out, he had dropped out of the top ten.

Fourth went to Team Excell Motorsports’ Bryan Cook, and fifth to new XC1 pro Ryan Lane. McGill now takes the series’ points lead while Kiser and Cook, each with a fourth and second, are tied for second.

In the ATV morning race, Team Yamaha’s Traci Cecco took the Women’s class and the overall win over Stephani Parton. Third overall and the top spot in the Open 4×4 Class went to Bryan Buckannon.

The 2008 Can-Am Grand National Cross Country Series continues with the Steele Creek GNCC in Morganton, NC on March 29 and 30.