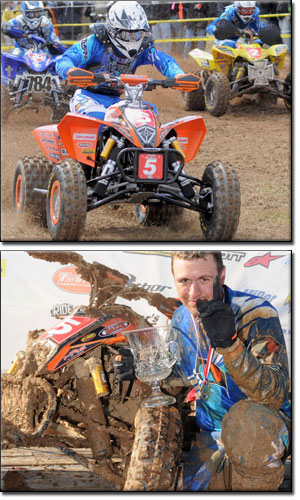 KTM Factory ATV GNCC riders Adam McGill and Taylor Kiser astounded GNCC fans when the teammates finished first and second at the second round of the GNCC series.

McGill who had finished a strong 5th place overall at the first round in Melbourne, FL was prepared to improve upon that finish at the Georgia race.

He was well on his way to his first win as soon as he and his KTM 525 XC Sport ATV pulled the holeshot at the start of the race. His teammate Kiser grabbed a mid-pack start but quickly began to move forward.

McGill started in the lead and intended to finish that way as he continued to charge forward pulling farther ahead of the pack with each lap.

During the two hour race in which McGill got out front and dominated his teammate Kiser was busy battling competitors to catch up to his teammate and move into that second place position.

Near the end of the race he managed to work his way into second; earning his best ever overall finish in a GNCC race.

In a weekend of firsts, McGill was able to hold his lead and take home the win after pulling an impressive six minute lead on the field by the end of the race.

“I am so happy to finish on top! We have a great team this year. My bike is running great and it’s unbelievably smooth. I’m glad to finally be up here; it’s been a long time coming,” commented McGill after the event.

With two rounds down, McGill now holds the overall points lead with Kiser three points behind him in second.