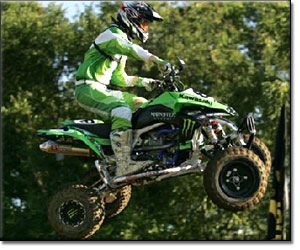 Monster Energy Kawasaki ATV rider Josh Creamer battled back to finish fifth during round eight of the WPSA at Wild Cat Creek MX in Rossville, Ind.

When the gate dropped in the SuperQuad Pro 450 race, Creamer got a bad jump and went into the first turn at the back of the pack.

After passing several riders on the first lap, he went on to battle with teammate Jason Luburgh and eventually the Kawasaki of Baldwin Motorsports’ Josh Upperman for fifth place. Creamer had fourth in site but simply ran out of time.

If I would have had another lap, I think I would have caught up to fourth place, said Creamer. This track was really fast and had lots of different jumps. When I was battling with Upperman, it brought me back to when we would race in the Pro-Am class.

Upperman rode a consistent race and finished in sixth place.

I was able to move up when some other riders connected in front of me, said Upperman. After that, I just set my own pace. This was my kind of track.

Luburgh, who was nursing a sore wrist injured in practice, also had a rough start but worked his way up to end the race with a solid seventh-place finish.

All the guys rode great, said Team Manager Jimmy White. I was really impressed that they all came back to finish where they did.

The Monster Energy Kawasaki ATV team will head to Old Bridge Township Raceway Park in Englishtown, N.J., on August 18, for round nine of the WPSA ATV Series.

For the most recent Kawasaki racing action, interviews and more visit www.kawasaki/racing.com

Dirt Trax Onlinehttps://atvmag.com
Check back frequently for new content and follow us on social media!
Previous articleGroup Plans ATV Adventure Across New Brunswick
Next articleSUPERTRAX CREW AT SHOWS ACROSS US AND CANADA