More Power Not A Bad Thing 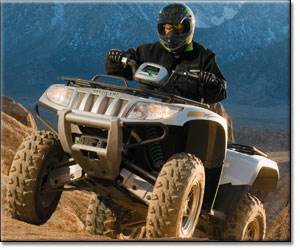 The new Thundercat, the Outlander 800 HO, the newly HP injected Sportsman 800 HO along with the Brute Force 750, are not inherently dangerous because of their powerful engines.

In every motorized form of recreation there are the top-of-the-line model segments that showcase the manufacturer’s best technology. These vehicles are always expensive and rarely purchased by anyone less than a seasoned rider.

This argument was thrown at the snowmobile industry in the early 90s – not coincidentally Arctic Cat was at the centre of the controversy then over the introduction of – you guessed it – the Thundercat snowmobile.

At that time it exceeded the market’s benchmark for displacement and HP by about 20 percent. Screams could be heard for more than a year from the bed wetters.

Turns out, after the industry was scrutinized in an effort to vilify powerful snowmobiles the naysayers were not just a little wrong, they were completely wrong.

Engine size was not a constant in accidents. The driver profile was the problem – and still is.

Dirt Trax Onlinehttps://www.atvmag.com
Check back frequently for new content and follow us on social media!
Previous articleNew Cat Plant Churning ‘Em Out By The Thousands
Next articleBosski Donates ATV Wagon trailers to Club