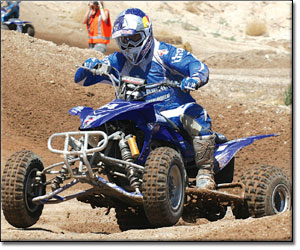 Round three of the 2007 ITP/Yamaha QuadCross Championship Series, at Arizona Cycle Park in Buckeye, Arizona, presented a large and talented field of 26 Pro class racers with an extremely hard-packed, blue-groove track surface.

These super-slippery conditions served as an ideal demonstration of the capabilities of ITP’s new QuadCross MX tires.

Team Yamaha’s Dustin Nelson, the defending series champion, put in what he calls one of his best races ever, taking a dramatic come-from-behind victory aboard his QuadCross MX-shod YFZ450.

After cross-rutting off the starting gate and rounding the first turn in ninth place, Nelson sliced through the pack — often sticking to an inside line while his competitors were searching for traction wherever they could find it — and slid into the lead with two laps to go.

From there it was clear sailing to his first win of the young season, as well as the series points lead.

The performance of Nelson’s tires in this situation comes as no surprise, as the QuadCross MX was designed and developed specifically for the type of track conditions encountered that day at ACP.

The ITP/Yamaha QuadCross Championship Series continues at Honolulu Hills Raceway in Taft, California, on May 6th, with seven more rounds to follow in 2007. All ATV racers are invited to participate, as there’s a class for nearly anyone. And the more times a rider enters, the greater his or her chance to win a GYT-R/ITP-equipped Yamaha YFZ450 in a drawing to take place at the series finale in December!

For more information, and to read about Dustin Nelson’s exploits in “The Nelson Report,” visit ITPQuadcross.com.

Dirt Trax Onlinehttps://www.atvmag.com
Check back frequently for new content and follow us on social media!
Previous articleHow About an 800 Scrambler?
Next articlePOLL RESULTS