New Bear in the Den? 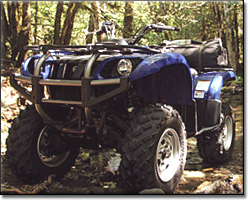 Yamaha has made big hay with the Grizzly 660 the past four model years. This fun and powerful ATV continues to sell in huge numbers. However, we think Yamaha is not getting all they can from the growing Big Bore Sport Utility marketplace with only one model in the segment.

We’re looking for the Grizzly to be around for some time in the future but we suspect it will be joined by a more potent and feature laden model very soon.