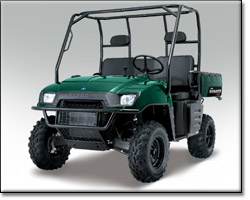 In what is clearly a move to dominate the ATT (All Terrain Truck) market Polaris unveiled the most outrageous Ranger yet for 2005.

The Polaris Ranger 4×4 lineup has been re-engineered for 2005 to include a new IRS rear suspension, longer travel front suspension, a lowered engine mount for a lower CG, new bodywork and improved attachment possibilities with a variation of the lock and load system used on ‘05 Sportsman ATVs.

So what’s so outrageous about all this? Their flagship 4×4 Ranger will be powered by a full-on Sportsman 700 EFI twin! Like, wow!

The new IRS chassis transforms the Ranger into what feels like an off-road racing buggy. Huge bumps – even jumps can be covered with the Ranger ATT at insane speeds.

Just in case you would like to limit those insane speeds, Polaris has developed a special electronic ignition key which will limit the top speed of the Ranger.

This is for job site vehicles and vehicles being driven by inexperienced pilots.

It’s a great idea and one we’re sure will be copied by other OEMs.

Dirt Trax Onlinehttps://www.atvmag.com
Check back frequently for new content and follow us on social media!
Previous articleIndustry Numbers Are Staggering
Next articleTrack Conversions a Big Hit