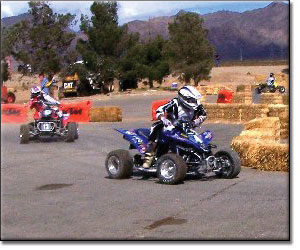 Music City Motorplex is home to the  3rd annual NASMOTO Extreme Cycle Jam ATV Championships for SMX ATV Pro-Am and Amateur ATV SuperMoto. This is a winner-take-all format with a winning purse in excess of $3,000.

The Extreme Cycle Jam will be the most demanding ATV race of the season. The high banks of the Music City Motorplex creates a terminal velocity of over 90 mph combined with the dirt section that is both tight and flowing produces set up challenges for all the competitors.

Too much emphasis on the asphalt leaves the racer open to attack on the dirt and visa versa. Dedicated ATV promoter practice is scheduled for Saturday morning. The premier ATV race is scheduled as the featured race on Sunday and includes the fan-favorite urban jump.

As a tune up to the Nashville round Granlund competed and won in the August 18-19 SMUSA Vet National and NASMOTO qualifier at the Reno Fernley Raceway.  When asked about his Yamaha YFZ performance Granlund has this to say, “The guys were catching me on the straights so I’m going to have to build more horsepower to stay competitive on the high banks of Nashville .”

The team at the Music City Motorplex has a treat in store for the fans as well. “We have modified the dirt section so that fans can really enjoy the jumps and see the passing lanes,” said Norman Partin, General Manager of Music City Motorplex. “This is the premier event for ATV racing in 2007 and our most exciting event to date!”

For the amateur racing enthusiast, NASMOTO has created a Sportsman class that encourages newcomers to participate in the sport and requires only a tire modification.

NASMOTO will have a tire changing service at the racing facility for all novice SuperMoto riders. The Sportsman class assists local motorcycle dealers in creating a low cost and highly entertaining weekend for their customers. In no other series can a fan say they raced on the same track as the pros.

Tickets with pit passes are $30 at the Music City Motorplex  box office or $15 at participating dealers including Castle Powersports, Precision Cycles, Americas Motorsports , Boswell Harley Davidson and at the track.  Children 5 and under free.

Dirt Trax Onlinehttps://www.atvmag.com
Check back frequently for new content and follow us on social media!
Previous articleIntroducing the Can-Am X Package
Next articleCreamer Rounds Out Top-Five in Englishtown