Oklahoma is O.K. for Wimmer 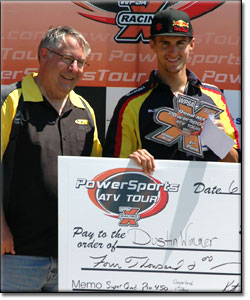 The third round of the WPSA SuperQuad Pro 450 series in Stillwater, OK was all about Weather and Wimmer.

Friday night alone saw 6 ½ inches of rain fall to completely flood out the Cooperland track and surrounding environs. Marble sized hail and strong winds also worried the ATV racers as many thought they could end up on “Oz” by the end of the day.

Incredibly, the weather started to clear up on Saturday and the track crew somehow constructed a raceable course.

The WPSA was forced to switch the planned double header to a single Sunday event. By doing so they had to hold all the heat races on Saturday, and launch the main on Sunday.

Through a massive and impressive effort, the WPSA and track crew pulled it off. The track was shortened due to the fact that the back half of the track was now Lake Cooperland.

Saturday’s heat races were up and down for the “Suzuki Squad” as Dustin Wimmer won his first heat race, but came in behind Pat Brown in the second. Gust carded a 2nd/5th, while Wienen went 5th/6th in their respective heats.

Sunday dawned a little overcast but soon the sun came out and began to dry up the saturated Oklahoma red soil. Everyone was still sloshing around in a variety of muddy boots, but spirits were high in the Team Rockstar/MSR/Pro Taper/Suzuki/Yoshimura rig.

Wimmer was running fast laps all weekend and Stillwater looked to be a likely venue for a “Dustin” win this year. Sure enough, when the main event finally arrived, Wimmer blasted off in second place behind Keith Little at the first turn.

However, even before the first lap was over, #191 showed the rest of the field the back of his MSR pants by putting his Suzuki QuadRacer® R450 into the lead.

>From there, Team MSR/Pro Taper/Suzuki/Yoshimura’s Wimmer simply set sail and dominated the competition crossing the checkers with a 6.5 second lead over John Natalie.

“I got around Little and put in a couple of really fast laps, then just rode consistent, fast laps for the rest of the race,” Wimmer said after the event. “Jeremiah (Jones) has been helping me in my training and mental outlook, and I really felt strong coming into this race. Sure enough, once the race started, I knew that no one was going to catch me.”

Team Coordinator Jones was really happy with Wimmer’s performace. “We had him training and working on his program overall for the last two weeks. He’s working really hard to be a champ, that’s what it takes. He’s a heck of a racer and is right on the edge of becoming a dominant competitor. Dustin has a great future in front of him, this race is just a sign of things to come.”

Gust went 5th with Wienen 6th. Although falling short of Taylorville’s Suzuki 1, 2, 3, 4, 5 sweep, it was a respectable finish and all three Suzuki factory riders are very close together at the top of the series points heap.

There were seven Suzuki’s in the SuperQuad Pro 450 final results proving once again that Suzuki is the ATV of choice for professional racers.