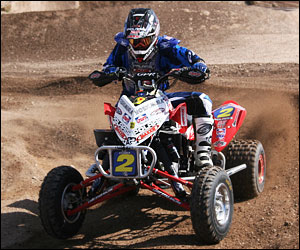 The Polaris/Lone Star/Eichner Racing Team rolled into the Arizona Cycle Park under the hot sky of Buckey, Arizona for round 2 of the ITP QuadCross Series, held April 13.

The track offered competitors the challenge of several huge jumps, including a spectacular uphill triple that gave racers and spectators a thrill. With enhanced performance from Yoshimura R&D of America Inc., FOX Racing Shox suspension, aftermarket components by Lone Star Racing and MAXXIS tires, Eichner made each ride appear smooth and effortless.

“I couldn’t ask for anything more from my Outlaw 525S,” said Eichner. “The bike performed flawlessly and I’m fortunate to have the support of many of the best sponsors in the industry – it doesn’t get better than that.”

Team rider, Angela Butler, demonstrated why she is one of the top female athletes in the industry by delivering the win in the Women’s Division aboard the Polaris Outlaw 450 MXR with enhanced performance from Yoshimura R&D of America Inc. Butler has successfully campaigned the Polaris Outlaw 450 MXR every time out this season in the Women’s division and has capably piloted her stealth machine to notable finishes in other classes as well.

Next stop for the Polaris/Lone Star/Eichner Racing Team will be WORCS, Round 4, at Pacific Race Ways in Auburn, Washington, April 18 – 20.