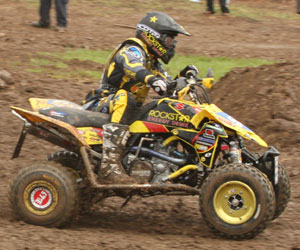 Gust placed second at the previous race in Pell City Alabama, but today Gust turned the tables and finished up on top. Wimmer still enjoys a commanding points lead in the series championship, which has seen Suzuki QuadRacers dominate.

Gust felt good to notch this overall win: “I’m 41 years old and know that I can still do this. I’m getting great support from my team and my Suzuki QuadRacer R450 keeps pulling me to the front.”

Rain and mud proved to be a challenge for all the racers in the second moto, adding another challenging element to the already difficult track at Ballance Moto X. “Doug has more experience in this kind of condition and it showed today,” Team Manager Kory Ellis said. “We’re all really proud to see him back up on top.”

Chad Wienen looked like he was going to dominate the weekend by qualifying the fastest time in qualifying on Saturday. Uneven moto scores again due to the muddy conditions netted him11th place overall.

The team is still holding the top three spots in the points race with a commanding lead by Dustin Wimmer with 134 points; Gust with 113 and Wienen with 89.

In the amateur classes Suzuki took many of the top honors with Cody Gibson taking first in both the Pro Am Production and Unlimited classes and Michael Brewster winning the 450A class.