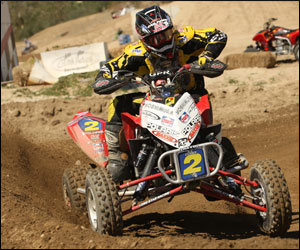 Polaris Industries, Inc. is thrilled with the performance of the Polaris/Lone Star/Eichner Racing Team as they demonstrated the abilities of their high-powered Polaris Outlaws showing “how the West was won” at Round 1 of the ITP Quadcross.

Doug Eichner aboard his Outlaw 525 S with enhanced power by Yoshimura R&D of America Inc., supported by the industry leader in suspension, FOX Racing Shox, along with A-Arms and Steering Stems by Lone Star Racing demonstrated why the ITP track announcers called him “Icon Eichner.”

Eichner clearly demonstrated his natural talent aboard his high-performance Outlaw with two holeshot starts and two comfortable wins in each Open Pro Moto despite the hard charging field of 20 other Pros.

Track officials declared “Icon Eichner” to be a certain Hall of Fame inductee when our industry develops this level of recognition.

Eichner made his victory look effortless being only a few seconds off the winning pace of the AMA GNC racers who shared the race venue with the ITP Quadcross Series competitors over the weekend. When interviewed in the announcer’s podium, Eichner gave thanks to Polaris Industries, Inc. for providing the essential support necessary for professional level competition and for the development of an incredible race machine which he hopes to become more involved with in the future.

Eichner gave much gratitude to his mechanic Scott Butler from Lone Star Racing and noted that for the first time in more than a decade, he has chosen a new tire for competition. His new MAXXIS Tires ultimately provided him with more hook-up off the concrete start and stability throughout the entire rough track.

Eichner stated he was proud to be able to successfully campaign the Polaris Outlaw 525 S in the Pro ranks again and looks forward to a promising 2008.

Hard charging Pro, John Shafe, was not to go unnoticed in the 450 Pro Class. Shafe was dealt a handicap with two less-than-desirable starts. Moto one found Shafe in a last place position as the field of 27 pros rounded the first corner.

Shafe worked his way through the pack bringing his Polaris Outlaw 450 from a last place starting position to a fifth place finish in the 450 Pro Moto 1, and ultimately finished his day in the 450 Pro race eighth overall.

Shafe is a force to be reckoned with on a Motocross track as well as Grand Prix and Desert competition, and is a certain up-and-coming super star. Team Captain, Doug Eichner, Team Manager, Joan Eichner as well as Polaris Industries, Inc. are all filled with optimism for Shafe’s future performances they are confident the best is yet to come.

Angela Butler once again showed why she is a notable figure in the Women’s Division after she delivered wins in Moto 1 and 2 on the Outlaw 450. Butler has nine Women’s National Championships to her resume and aboard her Outlaw 450, which she is currently running with a stock motor.

Butler was able to master the track and provided two well-earned first place finishes on the legendary Glen Helen track which is noted to be an absolute horsepower track. Her wins are a true demonstration of the riding talents of this fierce lady and the Outlaw 450’s stock power plant.

Next Stop for the Polaris/Lone Star Racing/Eichner Racing Team will be at WORCS Round 3, in Havasu City, Arizona, March 21 – 23, 2008.