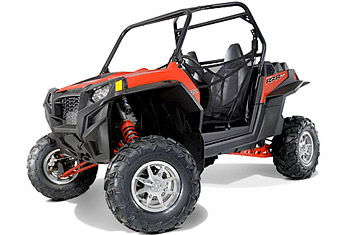 RANGER RZR Introduces a Whole New Class of Side x Side

The RANGER RZR has the only family of Sport Side x Sides with Razor Sharp Performance for all types of recreation. It all started in 2008 when Polaris introduced the only trail-capable Side x Side, the RANGER RZR 800.

For 2011, the family adds the RANGER RZR XP 900, a whole new class of Side x Side that continues to offer the ultimate combination of power, suspension and agility and takes it to the extreme.

Built for razor-sharp, Xtreme performance, the RANGER RZR XP 900 has a new 88 horsepower, 900 Twin, Electronic Fuel Injected (EFI) engine, a new 3-Link Trailing Arm Independent Rear Suspension (IRS) with 13-inches of ground clearance and 14-inches of travel, and is light weight with a low center of gravity for unmatched cornering. These features make the RANGER RZR XP 900 the only extreme performance Side x Side on the market.

“The RANGER RZR family delivers the ultimate combination of power, suspension and agility,” said Matt Homan, vice president and general manager of Polaris’ Off-Road Vehicles Division. “When we set out to design the RANGER RZR XP 900, we wanted to create a ground-breaking, high performance vehicle to complement our current, best-selling RANGER RZR line. The result is simply incredible.”

The ultimate combination of power, suspension and agility starts with power. At the heart of the RANGER RZR XP 900 is the all-new, 88 horsepower ProStar 900 Twin EFI engine that was built specifically for an extreme-performance Side x Side.

The engine features Dual OverHead Cams (DOHC), four big valves per cylinder and a 180-degree crankshaft for balanced performance and fast throttle response for groundbreaking acceleration. The combination of 88 horsepower with the vehicle’s light weight provides acceleration that is 29-percent quicker than the next quickest Side x Side on the market.

Efficiency has been maximized by eliminating all right angle drives to the rear axle resulting in less friction and more power delivered directly to the rear wheels. And, the simple and efficient design also provides a very quiet transmission.

In order to handle the massive power of the new engine and keep the ride smooth, Polaris designed the all-new, 3-Link Trailing Arm IRS.

Its monstrous 14-inches of terrain-absorbing rear travel and 13.5-inches of front travel soak up the rough stuff and deliver a smooth, precise ride, while its astounding 13-inches of ground clearance gives the machine the ability to tackle any obstacle in its way.

For razor-sharp agility, RANGER RZR XP 900 has no equal. Even with its incredible ground clearance, the unit still features a low center of gravity for the ultimate ride over rough terrain. The patented, engine-behind-the-seat design and rear weight bias deliver extreme, razor-sharp agility and performance, while the race-inspired rear suspension maximizes traction and power in the corners.

To provide precise cornering, the suspension’s radius rods extend deep into the wheel hubs and feature an uneven link geometry that optimizes camber.

Tires lean into the corner through the suspension travel, and plant more tire surface on the ground for maximum control. The trailing arms also minimize wheel scrub for superior straight-away power to help the driver stay true to line.

A premium vehicle needs premium features, and the RANGER RZR XP 900 has many. The machine features the industry’s first factory LED headlights that shine a high-intensity beam to turn night into day and throw light forward beyond conventional halogens.

To maximize cooling capacity, the unit features a massive grill opening and a front air dam for improved air flow. For safety, the RANGER RZR XP 900 has a certified roll-over protective structure (ROPS).