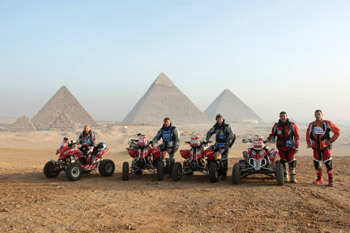 Polaris Benelux is extremely proud to announce the victory of the Dutch Championship by Ramon van Mil. Racing the Outlaw 450 MXR, Ramon secured the Championship in the international class by winning the last four races.

“Defeating the previous five-time champion was our goal from the start of the season but almost became a mission impossible after some early season mistakes in setting up the ATV properly” said Ramon. “After the right adjustments, the speed, handling and reliability of the Polaris Outlaw 450 MXR were unmatched.

The Outlaw has had impressive success in the Rallye Raid with Deltrieu taking first at the Romania-Hungarian Dakar race (six Outlaws finished in Top 11), first at the Desert Lybia Challenge, with the Outlaw taking all three podium spots, and second at the Portugal Dakar race.

Dirt Trax Onlinehttps://www.atvmag.com
Check back frequently for new content and follow us on social media!
Previous articleBallance, Cecco and Ockerman Dominate at Ironman
Next articleTJD Now Distributed By Tucker Rocky