Polaris/Rath Sportsman 850 XP Back to Back Wins! 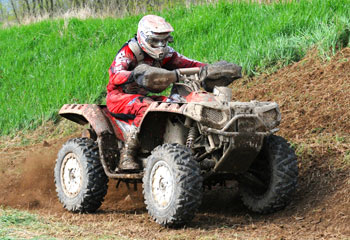 The winning weekend was started Saturday, Aug 1, at the OMA National being held at the legendary Millville MX track, in Minnesota.

The Millville track is well known for hosting the Outdoor Bike Nationals but was perfect for a little cross country action as well. Taking the opportunity of summer break from the GNCC’s Polaris and Rath are busy getting some additional testing and development done on their race bikes.

Taking the win, along with placing sixth overall in the morning class, left Rath ready for Sunday. “I think this is the best the bike has felt all season, we have dug in hard to put together a winning program and that effort is starting to show with the results.” said Rath.

The winning didn’t stop there! Saturday night, the team made the trip to Decatur, IA, for Round 5 of the IATVHSS race held on Sunday. “The IATVHSS Series is one I really enjoy racing. The people, the tracks and the rider turnout is hard to beat. I have been wanting a win there for quite some time and it was a great feeling to put the Sportsman XP back on the podium,” said Rath.

“Rath Racing has been instrumental in the success of the Sportsman 850 XP in its inaugural year on the race circuits,” said Eric Nault, Polaris race team manager. “Polaris appreciates the time and effort the team has invested in preparing and dialing in the quad and is excited for the second half of the racing season.”