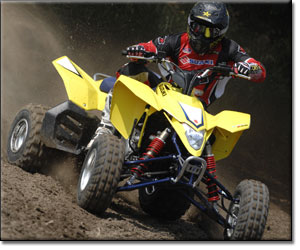 The 2008 QuadRacer R450 was presented to the North American media for riding, scrutiny, and a whole lot of fun this week. The press ride was held at none other than Digger Doug Gust’s Salem, Wisconsin home.

Doug’s house also doubles as a complete quad testing facility and training center, which made this venue a perfect choice. Using Doug’s home was made even more meaningful as Gust, a multi-time champion and racing icon, helped develop the QuadRacer at this very facility.

The new 2008 QuadRacer R450 features over 100 changes. There are over 50 changes alone in just the chassis area. Suzuki engineers worked hard to make the best even better. The refinements in total make for an even better machine as evidenced by the collection of editors, test riders, and racers on the challenging Gust practice track.

The all new ECM Logic and Ignition Control System and reshaped cam profiles were instantly evident upon riding the new QuadRacers The new ECM monitors throttle position (TP), engine RPM and the transition rate of both the Throttle Position (TP) and the Engine RPM.

It then determines the optimum Fuel Injection Volume and Spray Timing, along with the optimum ignition timing that improves acceleration. Across the board, everyone who rode the yellow test QuadRacers, noticed this marked improvement in increased engine output, especially in the low to mid rpm range. There were also gearing changes and a new countershaft to improve shifting feel.

Next up were revamped suspension settings with new Kashima coating that reduce friction and allow for a definite smoother performance. The 2008 suspension is supple yet firm giving the riders even better steering input and a much smoother ride. The ’08 QuadRacer soaked up both large hits and stutter bumps with ease. The smoother ride was also enhanced with a trick “gripper” seat cover, new rubber mounted bars and new tires with a larger diameter.

Digger Doug was pouring on the praise for the new QuadRacer, “The ‘08 QuadRacer is unbelievable. Over a hundred changes and you can really feel the difference. The power is unbelievable, the suspension is way better, the seat has a great feel, everything is in tune with a rider’s comfort and control. It’s a lot like my race bike.”

Gust went on to comment about the actual on-track performance, “It was amazing. I was out there doing all the jumps on my track on a stock bike. I’ve been racing quads for 20 years and that is something I’ve never ever been able to do. Now, I can do it on this new 08.”

When asked what riders are going to notice most about the ’08, Doug answered: “That’s easy – the suspension and the power. It’s even more race ready than before.”

Doug’s teammates agreed. Chad Wienen said, “Suzuki took a lot from what they learned from the ’07 racing quads and put it into the suspension, motor and transmission of these new bikes. With these improvements, they are even more raceable as a stock ATV, as well as a great all around sport ATV. I know I could go race a stock ’08 and do really well.”

WPSA Series points leader Dustin Wimmer said: “What I noticed most was that the suspension is a lot better – softer a lot of the way around but still able to absorb the big hits. Also, it has much better low end power. Tires are also a lot better. The rubber mounted handlebars and seat are really nice…the seat is a lot like our race seat. The new Engine Management System will help people out on the dry slick tracks. All around, it’s just faster, smoother with better handling. I like it a lot.”

Suzuki, always working to make things better, brought along a contingent of engineers to join in the fun and answer technical questions to the assembled press.

The new bike will be available in August and will come in yellow, white and a new limited edition black model.