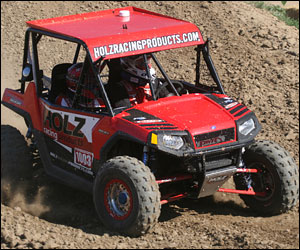 The RANGER RZR dominated the WORCS and Best in the Desert races this past weekend with two podium finishes at the Hollister Hills WORCS race and two podiums at BITD’s Bluewater Gran Prix.

WORCS’ Rhino Mod class saw RANGER RZRs take first and second place. Mark Holz finished the race on top about 30 seconds ahead of Doug Eichner and more than a minute ahead of the third place finisher.

At the break of the WORCS season, Eichner holds the lead in the Rhino Mod standings and Holz is in sixth after racing just two WORCS races. The next WORCS race is August 15-17, in Olympia, Wash.

Jagged X and their No. 1919 RANGER RZR, piloted by Brandon Schueler and Blake Van de Loo, left the line strong falling into third position after the awesome landrush start.

By the time the crew reached the pit area, the No. 1919 had found its way to the front position and never looked back.

The Polaris RANGER RZR held off the rest of the field to gain Jagged X and Polaris Racing their first 2008 BITD win.

The second-place finisher also was piloting a RANGER RZR. The win helps secure BITD season championship points lead for Jagged X and Polaris Racing going into the famed Vegas to Reno race to be held August 21-23.