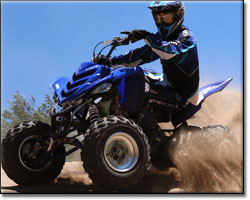 The 700R is a significant choice as Best In Class because it is the industry’s first ever large production Sport ATV with EFI. It’s an easy winner because its engine delivers class-leading power and torque to a throng of already converted Raptor customers.

Since it first appeared in the marketplace, the 660 Rap has been one of the most popular performance ATVs ever and now, those thousands of owners will be upgrading to the new 700R and will be getting one of the finest examples of the Pure Sport breed ever produced.

Tell us who you think should’ve won Best Pure Sport ATV in All-Terrain Vehicle Magazine’s 2006 Best In Class Awards. Scroll down to cast your vote!!

Dirt Trax Onlinehttps://www.atvmag.com
Check back frequently for new content and follow us on social media!
Previous articleYFZ 450 Puts Up A Good Fight
Next articleSpill It To Carter