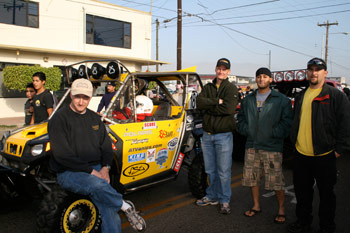 Mark Lindsay and his RANGER RZR captured the SCORE “UTV Sportsman” championship leading the class with 204 points, 40 points ahead of the second-place finisher. The championship is the fourth for the RANGER RZR in 2008.

“Polaris is extremely happy with the success of the RANGER RZR during the 2008 racing season and we congratulate Lindsay on his championship,“ said Craig Scanlon, product line sales manager for the Polaris Side x Side Division. “The RANGER RZR continues to show its versatility and endurance in Side-by-Side racing and with the addition of the RANGER RZR S, we look forward to a successful 2009.”

Earlier this season, Lindsay made history in SCORE racing by being the first Side-by-Side to finish the Baja 500. His four-man team including himself and Phil Holdsworth as drivers, and Jason Spiess and Derek Tungmala as navigators, finished third in the Baja 1000 despite a couple accidents and challenges. The finish made Polaris Side-by-Sides the only vehicles to finish the Baja 250, 500 and 1,000; with a RANGER RZR finishing the 500 and 1000 this year, and Matt Parks’ 2007 history-making finish of the Baja 250 in a Polaris RANGER XP.

“The vehicle handled the silt, rocks, whoops and sand like a dream,” said Mark Lindsay. “Being the only Side-by-Side brand to finish the various SCORE races proves Polaris vehicles are more rugged than any other Side-by-Side.”

Lindsay’s SCORE championship is the fourth for the RANGER RZR in 2008. Jagged X and their No. 1919 RANGER RZR took their second Best in the Desert Points Championship in 2008 starting the season with two second-places and ending it with a dominating five consecutive firsts.