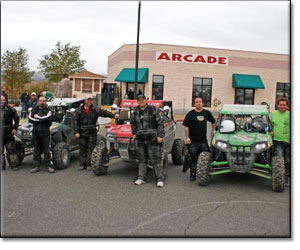 Continuing its winning ways in 2008, the RANGER RZR took all three podium spots at Best in the Desert’s Epic Racing Products Parker “250” in Parker, AZ.

With 19 Side by Sides entered, three being RANGER RZRs, the RZRs dominated the class leaving the fourth place car in the dust, about 15 minutes behind.

Mafia Industries RZR took the top spot with Jagged X’s in second and Jerome Vinagro in third. All three RZRs had a flawless race from start to finish, and finished only five minutes apart.

“The RZR has picked up where it left off in 2007, “said Craig Scanlon, product line sales manager for the Polaris Side x Side Division. “We thank everyone supporting RZR racing and if this race is any indication of what’s ahead, it should be a great year.”