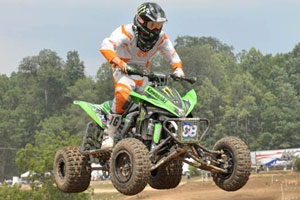 Monster Energy Kawasaki’s Russell Shumaker rode to his best finish of the season just outside the top five during the eighth round of the AMA ATV Motocross Championship Series at Muddy Creek MX in Blountsville, Tenn.

The first moto had Shumaker starting near the back of the pack, but by the end of the first lap he had passed his way up to eighth.

He got a break when two guys in front of him collided, moving him up to sixth for the moto. In the second moto, he was hit going into the first turn and was able to come back for 13th.

“Second moto I came out of the gate really good,” said Shumaker. “I ended up bouncing off everyone and got tangled up with two guys in the first corner. Overall I’m really happy.”

Even though Shumaker is the youngest member on the team, he was able to hold down the best finish of the Kawasaki crew.

“I’m really excited about my finish,” said Shumaker. “I’m just hoping to use this as momentum and keep improving on the Kawasaki.”

Creamer had a good jump at the start of the first moto, but had to pull in with a bike issue. He made up for it in the second moto by getting a top-five start, finishing the moto in sixth and 14th overall.

“The second moto I had a bad gate pick because of the first moto finish, but I got the jump right as the gate was dropping and was in the top five in the first turn,” said Creamer. “The race wasn’t as great as I had wanted but I was able to come away in sixth.”

Shumaker’s mechanic and dad, Paul Shumaker, showed his ultimate commitment to his son’s racing career after he tore his bicep while lifting the quad on the starting line a few races ago. He has since had surgery and now is in a cast for 10 weeks.

“He knew right away that something was wrong because it shriveled up,” said Shumaker. “He’s still supporting the team with his Monster Energy sticker on the cast.”

There have been many changes to the ATV program this year. The cancellation of the team’s primary series was an unexpected transition, but the team has also continued to make improvements to the impressive KFX®450R.

“It’s a great quad,” said Creamer. “The conditions have been tough this year with all the mud races and I think this race we were able to get some good set-ups figured out. We also tested a few weeks ago and that really helped us out.”