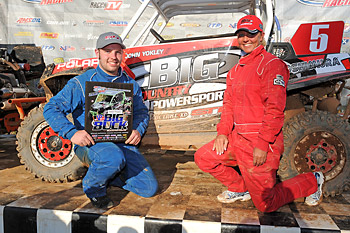 It was brought down by John Yokley and co-driver Ellen Yokley. The weapon used was a Polaris RZR, locked and loaded by Big Country Powersports.

This Big Buck did not surrender easily. The Big Country entry was accidentally spun out by another competitor in the first turn in the early moments of this hour-long race, leaving it in last place heading into the woods for the first time.

Big Country was persistent in its pursuit, however, and stalked its first-place prey lap after lap, never losing track with its 26x9R-14 STI Roctane XDs.

By the end of the pursuit, the Yokleys had caught and dropped a herd of 20 XC1 Modified cars to not only put a bullseye in the target but pull away by over two minutes at the checkered flag. Big Country snared first overall out of 48 side-by-sides – a big game trophy in anyones book.

The team is now tied for second place in the XC1 Modified point standings and setting its sights on the next UTV GNCC event in Millfield, Ohio, the first weekend of June. Four rounds remain for UTVs.

To learn more about Roctane XD tires and the entire line of high-performance, high-value STI products, go to stitireandwheel.com.

Dirt Trax Onlinehttps://www.atvmag.com
Check back frequently for new content and follow us on social media!
Previous articleYamaha Assembled in USA Rhino Sweepstakes
Next articleCAN-AM ATV AND SXS RACERS EARN PODIUMS ACROSS US