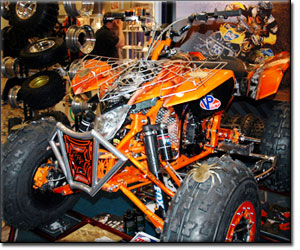 The Dealer Expo in Indianapolis is a showcase for every major motorcycle/ATV aftermarket manufacturer in the world, and 2008 was no exception.

But it’s not just an aftermarket show, thanks in large part to efforts by American Suzuki, which annually has a prominent display of accessories as well as motorcycles and ATVs in the main showroom.

And the American Suzuki booth was not the only place on the convention floor where a show-goer could find Suzuki ATVs. They were the choice of a number of aftermarket manufacturers to best show off their own products.

Not to be missed was the Suzuki QuadRacer R450 in the Douglas Wheel exhibit. Appropriately named Spyder Quad, the quad was literally crawling with live tarantulas. Quinn Michael of Outta Control Racing paid meticulous attention to every detail of this incredible custom quad. Bright orange body paint was decorated with skulls, spiders and web designs.

Live spiders could be found exploring the inside of the headlights and in a clear plexi-glass cage that replaced the battery box when the customizer installed a kickstarter.

Spider-themed bumpers, nerf and grab bars were supplied by Tarantula Performance Racing not surprisingly. They also made intricate laser cut spiders and webbing to round out the theme.

Another manufacturer who chose the Suzuki QuadRacer to help show off its line of products was Jardine Performance Products. In honor of its “Golden Anniversary”, Jardine chose a black Limited Edition QuadRacer R450 and gold plated all of its products on the quad.

The result was so striking that, according to President Rick May, the dealers all want Jardine to sell 24k versions of current products. The company’s 50th Anniversary products for the LT-R450 are the aluminum front bumper, nerfs and a full system exhaust.

Ogio chose the Suzuki KingQuad 750AXI to show off its new front and rear rack bags. Chosen as one of Dealer Expo’s Top 10 products, this was a well-visited display.

With water bottle holders, multiple “D” rings for additional, map compartments and dividers, these bags are a perfect complement to any of the Suzuki line of utility quads.

The 2008 Dealer Expo was a great success for Suzuki. Motorcycle/ATV Division Communications Manager was pleased with the turnout: Anyone who wants to see the latest products in the motorcycle and ATV industry absolutely must attend the Dealer Expo in Indianapolis. And to have so many Suzuki ATVs used as display vehicles for these awesome parts and accessories is a strong sign of the demand for Suzuki’s vehicles.