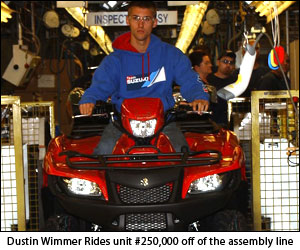 In a year of milestones for Suzuki, the manufacturer’s Georgia-based ATV manufacturing facility celebrated the production of its 250,000th ATV on March 31, 2008.

Suzuki will also celebrate 2008 as the 25th anniversary of it production of the industry’s first 4-wheeled ATV – the 1983 Suzuki LT-125 – with anniversary events scheduled throughout the summer.

In May 2002, Suzuki Manufacturing of America Corp. (SMAC) opened in Rome, Ga., as Suzuki’s only U.S.-based manufacturing facility and began producing the Eiger series of ATVs. Today, 300 SMAC employees are building ATV frames, molding plastic and assembling KingQuad 400s, 450s and 750s at a rate of more than 200 units in an eight-hour shift. Last year almost 60,000 quads came off the line.

A commemorative ceremony was held at the factory on Monday, March 31, 2008 in front of an assembled group of factory employees, local dignitaries and media, invited guests and the Suzuki factory ATV race team – Team Rockstar / MSR / Suzuki / Yoshimura / Pro Taper.

In attendance was the Mayor of Rome, Wright Bagby, who graciously thanked Suzuki for helping the community expand its manufacturing base. “For the last 10 years, we have been fighting to save manufacturing jobs,” Bagby said in front of a large commemorative banner. “With the help of people like the employees of Suzuki who were on the cutting edge of helping us turn around our manufacturing situation in the South and in Rome, we were able to save jobs and continue having a higher percentage of manufacturing jobs in the community than most places in the South or probably in the country.”

Kory Ellis, Team Rockstar / MSR / Suzuki / Yoshimura / Pro Taper’s Manager, introduced Team Suzuki’s ATV race team and thanked the employees of the factory for producing such great products and for all their support.

AMA ATV Motocross Series current points leader Dustin Wimmer rode the historic ATV off the production line to a cheering crowd. The red KingQuad 750 AXi 4×4 had been signed by all factory personnel. The team joined the mayor and other local government attendees in adding their signatures.

Mel Harris, Vice President of American Suzuki’s Motorcycle/ATV division, was unable to attend but was proud of the achievement: “Congratulations to the city of Rome, Ga., and our family of employees at the Suzuki Manufacturing of America Corp. who believed in this project and made it all happen. A quarter of a million ATVs in six short years is not only a huge accomplishment, but a clear example of Suzuki’s commitment to the ATV market. I thank everyone for their part in our continued success.”