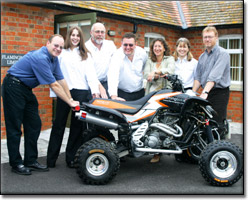 A group of keen quad bikers will be riding to the ends of the earth, well Lands End at least, to raise money for Cancer Research UK. Dean Gillings, Alex Rousell and Carl French, known as the “Swamp Monsters” were inspired to ride over 800 miles for charity when their close friend and fellow quad bike enthusiast was diagnosed with cancer of the oesophagus.

Richard, affectionately called the “Fly” by his quad bike companions, has sadly learnt that his cancer is terminal, but this hasn’t stopped him riding his quad whenever possible and even riding his ridiculously large motorbike!

The Swamp Monsters will be riding the notorious route of John O’ Groats to Lands End which are the two furthest points in the UK. This momentous motorised mission will start on the 29th May in the Northern extremities of the UK and finish four days later on 1st June way down in the South West’s last stop before the open sea.

Dean Gillings and Alex Rousell have bravely volunteered to ride their quads whilst Carl French has been roped in to act as ‘wing’ man for the event. Carl will be driving the support vehicle, very kindly loaned by Flamingbox Limited, as well as taking over from Alex or Dean in the event of posterior fatigue.

To follow the gang’s journey across the UK or donate to the Cancer Research UK cause, log on to: www.justgiving.com/swampmonsters.

Daily emails will be sent (technology permitting) with their progress and anecdotes for people who express an interest, whether you decide to give to the charity or not. We would very much appreciate your support and we know that the cause welcomes all support and assistance offered.

Dirt Trax Onlinehttps://www.atvmag.com
Check back frequently for new content and follow us on social media!
Previous articleIs A Honda UTV On The Way?
Next articleBombardier ATV becomes Can-Am