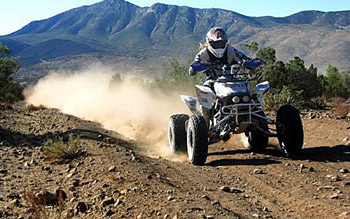 After a long and dusty season in the desert, Christy Racing wrapped up the SCORE International Class 24 and Overall Pro ATV titles with a determined ride at the final event of 2009, the Baja 1000.

With wins at the San Felipe 250 and the Baja 500 earlier in the year, the team needed only to complete the 1000 to clinch the 450 class championship.

But the overall title was still up for grabs, depending on the outcome of the race. The Baja 1000 win was out of reach for the Christy’s team this time (they won in 2008), but a strong third place finish was enough to take series overall honors by a narrow four point margin.

Led by team owner Craig Christy, the Duncan Racing-prepped Honda TRX450R started strong in the Baja 1000, with ex-GNCC Pro rider and OMA Champion Andy Lagzdins putting in a steady and conservative ride to put the team in the hunt early.

After an extended stint by Steve Abrego around the San Felipe area, Joe Bernal ran up the edge of the Sea of Cortez and handed the machine to 2008 Best in the Desert Pro champ Dave Scott. As night fell on the Baja peninsula, the lights also went out on the Honda, requiring stator replacement at the halfway mark of the race.

After this setback, Scott raced through the most demanding section of the course: Mike’s Sky Ranch. Avoiding overturned buggies and broken trucks in the early hours of the morning, Scott persevered and handed the quad back to Lagzdins for the run up the Pacific coast.

Coming into Santo Tomas with the ITP Holeshot XCT-clad machine working flawlessly, Lagzdins handed off to Christy, who would endure the last leg of the course to the finish.

Christy crossed the line after 29 hours of grueling terrain and challenges to secure his first SCORE Overall Championship. One set of ITP Holeshot tires lasted the entire Baja 1000 race, and their legendary ITP reliability and performance made yet another championship possible.

The SCORE International Series is considered by many to be the pinnacle of endurance racing, and Team Christy’s success couldn’t have been realized without the help and support of ITP Tires, Duncan Racing, Elka Suspension, Moose Racing, Alpinestars, Rockstar Energy Drink, PWR Radiators, Cycle Gear and DirtFirst.