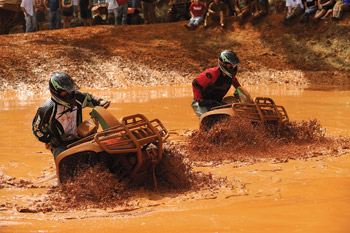 In the magazine biz we do our fair share of riding but when Arctic Cat’s Kale Wainer requested my attendance at an event called Mudstock, I had no idea what was to follow.

Arctic Cat had selected a rogue group of ATV editors to “race” its new made-for-mud 4-wheeler, the 700 H1 MudPro. With not much more information to go on I immediately started to dig around the internet to find out everything I could about this Mudstock deal.

Thanks to Google, in a matter of minutes it was abundantly clear what was going on. The race was going to be an extremely muddy affair (and I mean waist deep and more). No amount of skill, endurance or past riding experience could prepare us for the sloppiness to come.

Held at the 2000-acre Mud Creek Off-Road Park, ATV fanatics from all over North America flock there in droves with modified quads in tow, ready to challenge the mud pit. This is no ordinary mud crossing.

We’re talking about the biggest, deepest, sloppiest Olympic sized pool of swamp sludge ever. Standing on the banks of the 4-foot deep mud pit and witnessing one modified quad after another stall, sputter and come to rest halfway across was a humbling experience that left the media racers feeling a bit hopeless.

The only person feeling more discouraged than we were was Cat’s Wainer. The reality of what was likely to happen was hitting him like a freight train.

Considering the countless number of veteran mud riders on outrageously modified, made-for-mud quads that had to be winched out race after race, combined with the fact we were riding a brand-new, stock product with zero mud crossing experience, had Kale’s head spinning.

The trepidation on Kale’s face was unneccessary. Turns out the MudPro was more than ready for the challenge. The 700 H1 EFI has a torquey 695cc, SOHC, single-cylinder engine, with its EFI system specially mapped to have a wider torque curve for mud slogging.

The machine sits an impressive 14-inches off the ground, has 10-inches of travel and comes stock with deep lugged MAXXIS ‘Zilla tires. There’s a way-cool and fully functional, elevated intake and clutch snorkel allowing you to go deeper and ultimately farther in impossibly wet conditions.

It’s also geared lower for better lugging in both high and low range and the springs and shocks are recalibrated to suit the big tires and to absorb surprise underwater hits to the suspension.

What seemed like an eternity watching the mud hole swallow machine after machine now turned into both anticipation and panic as, finally, it was go-time. With the MudPro in low range, four of us at a time penetrated the mire and instantly found ourselves in uncomfortable territory.

To call it a race is off the mark. Any race I’ve ever been in usually requires some degree of velocity. In mud crossing, your first priority is balance. Tip-in the throttle too abruptly and the front end goes straight up in the air – the ATV is basically floating in four feet of muck.

As you ease off the throttle, the front end planes out again. While this is happening you’re trying to find the best position to keep from tipping left or right too far and taking the swim of your life.

Obviously, trying to steer in this guck is next to impossible and experienced mudders tell me the trick is to “lean turn”, however, these guys aren’t worried about how much mud fills their waders. This balancing act goes on continuously throughout the race while inching closer and closer to dry land at the other side. When all was said and done, every Arctic Cat MudPro (and editor) made it across and, in doing so, made Kale a very proud Papa.

It’s Great to be a Mudder

The 700 H1 EFI MudPro is truly the ultimate stock mud quad. Although this segment represents a mere sliver of the ATV market, Arctic Cat has chosen to own it, and own it they do.

The risk of having this experiment potentially backfire paid off as thousands witnessed eight inexperienced mud-wookies accomplish something on stock machines that many seasoned mud riders were unable to do on seriously modified vehicles.

Kudos to Arctic Cat for having big-time confidence in its product and for having the conviction to let it all hang out. Expect to see the pits filled with MudPros at next year’s Mudstock.