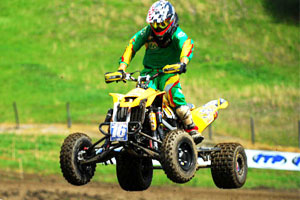 The #16 Can-Am took 2nd Overall at Round 6 of the AMA/ATVA ATV Championship series at Unadilla in New Berlin, NY.

Jeremy Lawson started the weekend by setting one of the fastest times in qualifying.

Team Epic has been working hard to get the Fox Shox dialed in on their DS 450 machines and the effort is really starting to show.

Lawson was third out of the first corner in Moto 1 but within 3 laps he had passed Dustin Wimmer and Josh Uperrman and was in the lead.

The #16 continued to set a blistering pace and literally pulled away from the rest of the field dominating Moto 1 at Unadilla. Sage Baker finished 12th in Moto 1 while Greg Gee came home in 18th.

As the Pro riders went to the start line for Moto 2 Mother Nature decided to dump some rain on the track. Lawson came out of the corner in 6th place and started fighting through the pack.

Vision was a problem but he was able to move his DS 450 up into 5th place for the Moto. Team Epic’s riders Greg Gee and Sage Baker came home in 15th and 16th place.

Overall finishes for the weekend were Lawson 2nd, Baker 16th, and Greg Gee 18th. Lawson moved into 6th place in the season standings and is closing in on 5th.

Jeremy Lawson is currently in 2nd in the ITP Grand Slam Series but tied in points with Joe Byrd.

Team Epic is back to the shop in Illinois preparing for Round 7 of the ATVA National series, to be held in Blountville, TN on June 21-22, 2008.