Team Picks Up Wienen For A Triple Threat 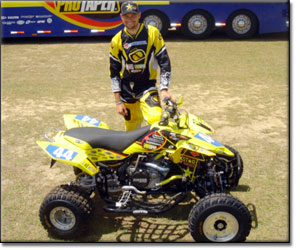 The industry’s best kept… secret is now officially out: Chad “Wide-Open” Wienen has signed with Suzuki and will be racing the WPSA series and select GNC events on a Team Rockstar/MSR/Pro Taper/Suzuki/Yoshimura QuadRacer® R450.

The 22 year old from Galena, IL has been tearing up the tracks from Glen Helen to Oak Hill and that got the serious attention of the biggest factory effort in Pro ATV racing.

“We looked at how fast he was going as a privateer and wondered how fast could he really go if he had a full race-equipped QuadRacer under him,” Suzuki’s Rod Lopusnak said. “We know that Chad will be a great asset to the team. He really works hard, has a lot of talent and heart and deserves this opportunity. With the factory support behind him, who knows what this kid can do out there. We’re not just talking championships – we’re talking records.”

“I was so honored to be approached by the best team in the ATV industry and have this opportunity,” Wienen said. I’m just so proud to be a part of this team and to be riding with Doug and Dustin. Ryan Cox is the best mechanic out there and a good friend. I’m privileged to have him turn wrenches for me. Everything has already been clicking between us. I just know this is going to be awesome.”

Although Chad has been racing quads since he was 16, he has only raced pro since mid-season 2005. Last year was his first full race season and he podiumed at Budd’s Creek in the first moto. He decided to drop the GNC series and put in a full WPSA season, which he finished 6th overall.

So far, Chad has been practicing on a stock bike with a Yoshimura pipe and Fox Shocks. “I can’t believe the way this bike corners. It turns amazing compared to my old bike,” Chad explained. “This is just a stock bike with only a few mods, but I feel like I could win on it.”

And he probably could.

First race for the triple threat Suzuki powerhouse team will be the Opening Round of the WPSA SuperQuad Pro 450 event at the Silver Dollar Raceway in Reynolds, GA this upcoming weekend. The event will be broadcast on ESPN 2 on June 16th at 1:00 pm.

Dirt Trax Onlinehttps://www.atvmag.com
Check back frequently for new content and follow us on social media!
Previous articlePOLL RESULTS
Next articleExhaust and Fuel Injection Adjuster for KFX450R