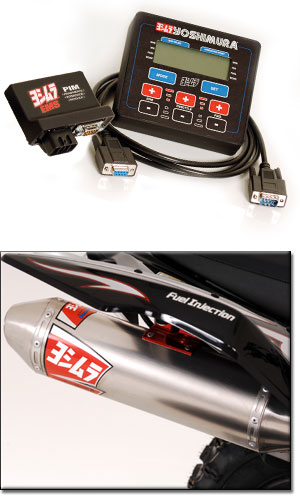 Yoshimura has been the leader as well as the pioneer in EFI (Electronic Fuel Injection). Expertise learned from years at the cutting edge of Superbike Racing has clearly put Yoshimura at the head of the pack when it comes to EFI tuning. The Yoshimura PIM and Ti- Pro Exhaust System equipped KFX450R takes the stock 36HP KFX up to an impressive 40.6HP. In addition, power delivery becomes much more linear and crisp.

“We’ve got a bit of an advantage for sure,” ATV Brand Manager Kory Ellis said. “Working with the Suzuki factory road racing team, we helped develop a lot of the technology used today. Also, for the last two years we have continually developed fuel injection adjusting devices for the Suzuki QuadRacer® R450 with a lot of success. Yoshimura has been working in this field since the beginning and we have a skill level that few can match.”

After any engine modification like switching from a stock exhaust pipe or after engine mods, you must re-map. The stock EFI has no idea what pipe is attached or what state of tune the engine is, it automatically defaults to stock parameters. The PIM units come with two preprogrammed maps for Yoshimura systems.

The #RF-432-2415 PIM is a piggyback unit that plugs in as an adjunct to the stock OEM wiring harness. This simple plug-in to the stock harness requires no major modifications; and takes about thirty minutes to install. The PIM comes with (2) pre-programmed fuel maps, which optimize fuel delivery for our Yoshimura exhaust systems. Map (a) offers best performance when utilizing the spark arrestor. Map (b) offers maximum machine performance with our race exhaust system. The PIM unit attaches directly on top of the OEM ECU and takes just a few minutes to install.

The FIMAK will allow for +/- percentage adjustment of fuel, at various operating points. (throttle angle and engine rpm). The FIMAK has a total of 200 mapping points available. Throttle angle is well defined at the lower throttle angles, where engine response is critical. Engine rpm adjustment points are available in 500rpm increments. Fuel trim is adjustable in 1% increments, with a +/- 20% threshold.

Dirt Trax Onlinehttps://www.atvmag.com
Check back frequently for new content and follow us on social media!
Previous articleTeam Picks Up Wienen For A Triple Threat
Next article250 Tiger 3-Wheeler