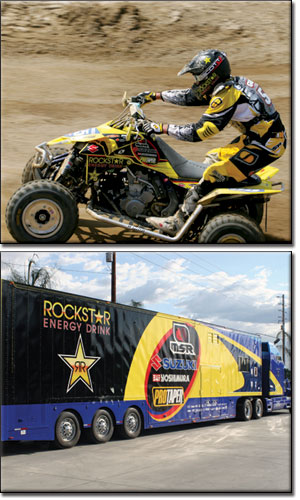 Team MSR/Pro Taper/Suzuki/Yoshimura – Energized by Rockstar showed up with a newly painted truck, new team shirts and new graphics. Rockstar Energy Drink was flowing throughout the upgraded hospitality tent, as the team was ready to come out strong… and newly energized.

Gust hit a slower rider in a corner and stalled his bike. This put him in last place but he was able to power it out to finish up 9th. Wimmer ran his race from 4th position, right behind Suzuki mounted Kory Ellis, who was looking to have a great day.

Doug Gust was able to shake off his first moto bad luck for moto two. The power of the QuadRacer R450® overpowered the concrete pad and Gust spun heavily leaving the line. The same Suzuki power pulled him forward to a decent fifth place start.

“I got a good start and poured it on early and really hard,” Doug related. “The QuadRacer R450 was going really good and things were going my way.” He was trailing Natalie in third when he was finally able to pass him by going wide in a turn in the rough section.

Gust was able to keep him in his dust for the rest of the race securing a #2 spot and a 3rd overall for the day.

Wimmer was running a great race in 4th when he tangled with John Natalie as Wimmer went for the pass.

“Natalie started slowing down and in the last lap we were battling really good,” Wimmer explained. I came up to the last turn and tried to go inside and we came together in the air and collided a little bit. Unfortunately two people passed us while we were untangling and I ended up 6th.”

Look for more excitement at Oak Hill next weekend as the venue moves to Texas.