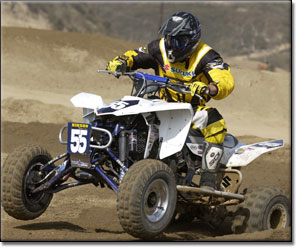 Defending champ Doug Gust will be heading up the Suzuki/Yoshimura team with new teammate, and 2006 runner up, Dustin Wimmer. Wimmer is hungry for the 2007 WPSA title since he lost it to Gust by only two points in 2006.

Suzuki won the coveted WPSA Manufacturers Championship title in 2006 and has recently announced that it will continue on as a series sponsor for the WPSA PowerSports ATV tour.

American Suzuki ATV Operations Manager Rod Lopusnak is also excited about next year: “After an incredible 2006 season, Team Suzuki/Yoshimura is excited to get back on the track. WPSA gave the fans the best, most competitive ATV race coverage ever!”

“Suzuki’s long history of excellence was exemplified in 2006 with its dominant run in WPSA competition,” said Scott O’Malley, PowerSports Entertainment, Inc. president. “This is truly an exciting announcement.”

Jeremiah will be coaching riders, helping in chassis set-up, and working to add a 2007 championship title for the Suzuki/Yoshimura team. Jeremiah will also be working with young up and coming Suzuki support riders.

Yoshimura Vice President Brant Russell feels that the 2007 WPSA season will be even better than the 2006 season: “Yoshimura is really looking forward to racing the full WPSA series in 2007. The WPSA came through on their commitments and gave us an even playing field on which to compete. The television exposure, a thoroughly professional structure, and nice people make us really glad to be back. We were fortunate in coming out with several titles this season. It will be tough to repeat, but we are certainly going to try!”