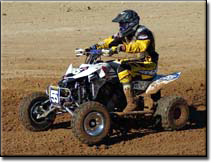 Although the weather was unseasonably cold and windy, competitors greeted the Oak Hill facility quite favorably. The track was wide, fast and had a lot of clay in the base. It never “blue-grooved” too badly and produced good racing all weekend.

The first moto saw John Natalie grab the lead with Doug Gust in 2nd a few seconds back. Doug’s QuadRacer LT-R450 slowly closed the gap and by the midway point the two were nose to tail. Doug put the pass on Natalie by the tower and pulled away to an easy win.

“This quad is so awesome,” an excited Gust said after the moto. “It is so comfortable to go fast on. I can push really hard and the thing is just so easy to ride. I’m going to win some races on this quad.”

Jeremiah had one of the last gate picks and started at the far end of the gate. Unfortunately he was pinched off going into the first turn and had to start the race towards the back of the pack. Coming through the pack, Jeremiah tangled with another rider and lost yet more time getting going again. The track was muddy from being heavily watered down before the first Pro moto. On his way towards the front, Jeremiah’s radiators plugged solid from the mud and most of the water boiled out. He had to back off a little past midway to preserve a finish.

The second moto was exciting as there were at least seven riders dicing for the lead. Doug tangled up with another rider and the two bikes became stuck “big-time.” By the time “The Digger” got going again he was a minute down to the lead pack of Byrd, Luburgh, Natalie and Ellis.

Jeremiah had a decent start but once again was rammed in a corner by another rider. Soon after the incident, his quad started missing and slowing down. Post race inspection revealed that the impact broke the battery box, causing an intermittent grounding condition. Jones was forced to pull to the infield and watch the rest of the race. “I had a decent start and was looking at moving up and winning this thing.” Jones said after the race, “I’ve been fast all weekend but these dumb things have just followed me these first two races. That’s just the way that racing goes sometimes… I just have to look forward to the next race.”

Gust meantime was blistering the Texas track. His lap times were easily the fastest of the day as he worked his way up from dead last and over a minute down. At the checkers, Doug rolled across the line in 10th. His hard riding salvaged what could have been a bad overall finish had he given up.

“This is a long season and every point counts,” Doug said from inside the Suzuki rig. “Today I was really strong. I knew if nothing bad happened that I’d win the second moto and the overall; but then I got hung up on the start and that plan went right out the window! When stuff like this happens, you have to stay calm and race to the front. Even though the win was out of reach, I ended up with decent points and I’ll take ’em. More importantly, I felt really good out there. Last week at Glen Helen I never quite felt right. This weekend, the ‘Old Digger’ was back. It was nice to run good for my fans and the folks at Suzuki. This LT-R450 is easily the best quad I’ve ever ridden.”

The team now has a three-week break till the Gatorback Florida race. The boys are hungry! Watch for the Suzuki/Yoshimura team to come out on top in the Florida sun.