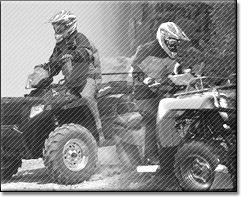 Rumors are rampant throughout the industry of even bigger ATV engines in the works. It makes sense rumors would surface of bigger powerplants after the blockbuster introductions of Kawasaki’s new 750 Brute Force and the Polaris Sportsman 800.

Understanding how rumors originate and giving some weight to the reasoning we’ve given here for these rumors, we’d like to fuel the fire with this comment: we believe there’s a 1000 cc V-Twin Sport Utility ATV in the works at one of the OEM’s test sites right now.

We’re convinced this mega-beast will surface as a production model in the next 18 to 24 months.