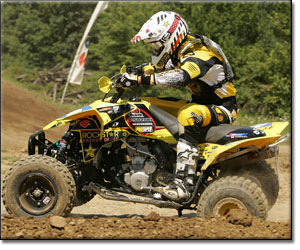 When the dust finally settled for the eighth round of the World Powersports ATV Tour in Rossville, Indiana, Team Rockstar/MSR/Pro Taper/Suzuki/Yoshimura’s Chad Wienen (#44) rode his Suzuki QuadRacer R450 to the top of the podium steps once again.

The team came into the race with Dustin Wimmer (#191) as the SuperQuad Pro 450 points leader. Wienen, teammate Doug Gust (#55) and John Natalie were close behind, so the pressure was on to keep a Suzuki in the lead.

The event started with a sloppy track from a downpour Thursday evening. But as the front went through, clear dry skies and cool temperatures allowed the track to dry out fully for Sunday’s main event.

Dustin Wimmer was blazing fast, easily winning both of his qualifying heat races. Chad Wienen got a pair of seconds and Doug Gust rounded out the team with a second and third. Chad Wienen had the fastest lap time of the weekend with 1:33:525.

The main event was well attended with crowds of fans lining the fence-line. The bleachers were also full with fans thirsting for Pro Quad action. The track was fast and well groomed with some good jumps, but no whoop section. All the prep was done, it was time for the main event.

Out of the gate it was Keith Little to cross the holeshot line first, however he went wide at the corner and Wienen came out in the lead. With an empty track in front of him, Wienen got on the gas and checked out, leaving the rest of the field behind him.

“I was able to run my own race,” Wienen commented. “I was able to do the race I wanted to and not have to work too hard. It’s just a whole lot easier to get them that way than from coming up from mid-pack. My Suzuki ran so good… It was a sweet win.”

Unfortunately for Doug and Dustin, early in the race a rider spun out and both Suzukis got tangled up in the ensuing melee. Wimmer’s front wheel was stuck in front of Doug’s rear wheel. It took almost ½ a lap to get the two quads untangled.

By the time Gust and Wimmer got back on the track, they were in the back of the pack. Wimmer charged forward enough to cross the finish in 8th forfeiting his points lead. Gust was able to get up to 13th.

It’s still anybody’s race, so be sure to continue to follow the action on August 18-19 when the venue moves to Englishtown, NJ.