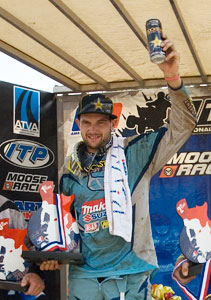 Although Dustin Wimmer clinched the 2008 Championship at the previous round in Red Bud, Michigan, and Suzuki had locked up the coveted Manufacturers’ Cup Championship, Wimmer’s teammate, Chad Wienen had yet to taste victory this season.

“It was a difficult year for me,” Wienen said. “It was like one step forward, two steps back. I was racing at 60 to 70 percent all year trying to get over these nagging injuries.”

Wienen was fastest in Saturday’s qualifying round and went into this contest to win the Tennessee classic for the second year. He took top honors in the first moto and then settled for second knowing that he had secured the overall ahead of teammate Dustin Wimmer.

Wienen was territorial from the victory podium: “I’ve won two years in a row here at Loretta’s,” Wienen said. “So the way I figure it, I am renaming this place Wienen’s Ranch… I hope Ms. Lynn won’t mind!”

“I was really looking forward to this race,” Wienen said after the event. “I am the defending winner here and really wanted that overall. The way things worked out – it was really pretty easy. I just cruised home in the second moto and wrapped it up. I’d really like to thank Suzuki for building such a great bike – the QuadRacer R450, my Mechanic Theo, and the entire team. In spite of a this being a pretty rough year luck wise, it felt really good to end it on an up note.”

“It was great for Chad to pick up the final win,” said Team Manager Kory Ellis. “Every rider on the team has won at least one race this season and that is important for building momentum into next season. We know the QuadRacer 450 is the best machine, we know every one of our riders is capable of winning, and the team in general knows that we can get the job done.”

For 2008 Team Suzuki definitely did get the job done. In the 11 rounds of the series, the Suzuki QuadRacer R450 was on the podium of every race. Here are the end-of-series final facts and figures:

Although the championship series is over, next up is the invitation-only Steel City ATV Open, to be held August 30th at Steel City Raceway in Delmont, Pa. Although it will be a non-points paying event, The Suzuki Squad will be there in force to put on a good show and win bragging rights.