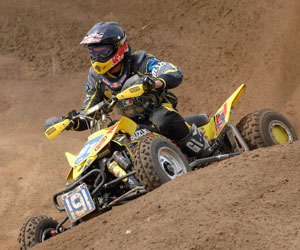 The event was part of the ATV Stampede, Round 6 of the ITP Tires/Moose Racing AMA/ATVA National Motocross Championship Series.

Wimmer held off Can-Am’s Jeremy Lawson throughout the moto to net the victory.

Jeremy Lawson was second on a Can-Am. Rounding out the podium was two-time and defending AMA Pro Champion Joe Byrd, who passed Josh Creamer (No. 9 Team Monster Energy Kawasaki) early in the event.

“The track was in great shape; Racer Productions did a good job with this race,” said Wimmer. “My Suzuki got me out front early and everything went well.”

Wimmer fought through tightening muscles in his arms during the event.

“I had arm pump in practice so I was a little worried about it,” added Wimmer. “I just got tight for a while, but I concentrated on keeping a steady pace and not letting my lead get too small. Everything is working well, so we aren’t making any changes for moto two.”

Dirt Trax Onlinehttps://www.atvmag.com
Check back frequently for new content and follow us on social media!
Previous articleButler Tears it Up at WORCS Round 5
Next articleAMA Pro ATV Motocross Championship Update