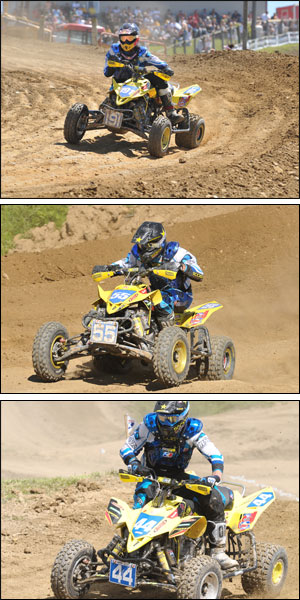 Dustin Wimmer, Team MSR / Suzuki / Yoshimura / Pro Taper frontrunner, had an up and down day at the High Point round of the ITP Tires/Moose Racing AMA/ATVA National Motocross Championship Series this weekend.

But at the end of the day he was able to maintain his huge points lead with a 5th overall.

The day started well for Wimmer (#191) with a holeshot in the first moto – his Suzuki QuadRacer R450 earning him the Suspension Systems Holeshot Award. From the first turn on, Wimmer had a five second lead which he did not give up until he crossed the checkers.

The second moto started with Wimmer and Josh Creamer tangling up at the start. “I don’t know how I pulled that one out… I was up on two wheels and somehow saved it,” Wimmer explained.

“I pushed really hard and got back into 4th place after the first lap,” Wimmer continued. “Then I noticed that my front tire was going flat and had to get it replaced. It must have suffered some damage in the collision. No sooner had I gotten back into the race my second front tire went. I’ve never had anything like that happen before and I’m not sure if this one was from the rocks on the track or the tangle with Creamer.”

When Wimmer returned to the track the second time he rode flat out securing the fastest lap of the day – 2 minutes flat. Even with Wimmer’s 15th place finish in moto two, he was still 5th for the day overall.

Team Manager Kory Ellis looks forward to the next event: “By Unadilla, we’re looking to extend our point lead. The bikes are working really well and the riders are going really good.”