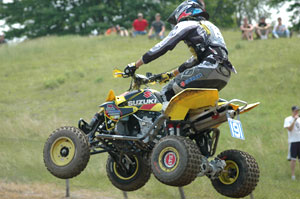 Wimmer went into the race with the fastest qualifying time on Saturday. He followed that up on Sunday when he parlayed a consistent 2-2 moto score for the overall win.

Wimmer was pleased with his performance: “The Suzuki QuadRacer R450 was really hooked up. Today was a perfect example of how well my Suzuki performs in all conditions – it’s a definite advantage.”

“Dustin ran a smart race today,” Team Manager Kory Ellis explained. “He had good starts in both motos, and ran two consistent races. This is how you need to ride in order to win a championship.”

Wimmer now holds a 61 point lead in the series overall while Suzuki continues its dominance of the Manufacturers’ Cup.

Wimmer was also the winner of the second round of the ITP Tires Grand Slam Presented by QUAD Magazine championship series – a four round series within a series.

In the amateur divisions Suzuki riders had a great day too. Cody Gibson won in the Pro-Am Unlimited Class; Michael Rakes took the Open B Class; Chase Cunningham captured the 4-Stroke A and the Junior 25+ classes; Jerry Huckabey won the 40+ division; Chad Lohr got first in the Vet 30+A.

Next stop for the team is at Muddy Creek MX on June 20-22nd.