WMA Round Five A Race to Remember 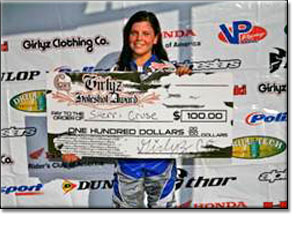 Women’s Pro Motocross proved to be one of the most exciting parts of the weekend as WMA Round Five took on Washougal, July 28, 2006.

The pro women were subjected to a last minute schedule change and had to practice at 7:00 am, immediately followed by Moto One at 8:00 am – all of this occurring prior to the morning arrival of the weekends’ other participants in the Men’s Outdoor National Motocross Series.

This didn’t stop them from delivering the kind of action that later kept the crowd cheering long after the men’s pro qualifying and practice were over.

Race one saw an aggressive Sherri Cruse grab the Girlyz sponsored Hole-Shot award but Jessica Patterson and Tarah Gieger were hot on her tail along with Ashley Boham.

Tania Satchwell and Vanessa Florentino were also in the hunt. Honda’s Patterson and Yamaha’s Gieger made the pass on Cruse, but Gieger soon slid out in a corner allowing Satchwell to move in past her. Satchwell made the best of it, closing the gap by lap six. Kawasaki’s Tania Satchwell was able to take the lead away from Patterson briefly as Patterson made a mistake in the whoops.

Patterson charged hard getting the lead back, holding on for the rest of the race. Satchwell did not give up however. She dished out relentless pressure, all the way to the end. Meanwhile, Mariana Balbi made her way up through the pack to claim yet another third place finish.

By the end of the race, she had closed the gap on the leaders, again showing her ability to fight her way to the front. Balbi was followed by Elizabeth Bash and Sherri Cruse who were in excellent form the entire weekend.

Moto Two was held at the end of the day. Scheduled for 5:15 pm, it was also delayed, as the men’s pro qualifiers and practices ran late. The pro women had a nine hour wait between Moto One and Moto Two. Not to be deterred, the women still put on a fantastic show for the enthusiastic crowd that stayed for the entire race as well as the podium celebrations.

Elizabeth Bash was hot off the start, winning the Girlyz Sponsored Hole-shot Award. She was followed by Jessica Patterson and Mariana Balbi. Patterson made the pass, taking the lead on the big downhill.

Tania Satchwell was all over the back wheel of Fox rider Mariana Balbi while Brazilian rider Balbi pursued Kawasaki’s Elizabeth Bash. Balbi was able to get by Bash in the back section but Bash reclaimed her position in the whoops. Meika Cornelius went down in the whoops in the first lap. By the end of the lap one, it was Patterson, Bash, Balbi, Satchwell, Cruse then Gieger.

On Lap Two, Mariana Balbi went down hard on the steep downhill, letting Satchwell, Geiger, Cruse, Florentino, and Whitmore get by, but quickly got back in the race. Tania Satchwell and Elizabeth Bash were in a heated battle by lap three with Geiger all over the back of Satchwell, making it a three way fight. While the competition raged behind her, Jessica Patterson pulled away gaining a 15 second lead.

Tania Satchwell finally got the jump on Elizabeth Bash on Lap Four Gieger also made her move, passing Cruse and Bash as well as she started her inevitable charge to the front. Mariana Balbi put the pressure on Sarah Whitmore on the big uphill, blazing by her in the woods, moving in behind Vanessa Florentino. Gieger and Satchwell then fought it out for the second spot, with Gieger finally getting the best of Satchwell, and setting her sights on Patterson who was still holding a 14 second lead.

Lap five saw the field start to spread out. Patterson was in the lead, then Gieger, Satchwell, Bash, Cruse, Florentino, Balbi and Whitmore. Patterson finally made a small mistake in the whoops, giving Gieger an opportunity to start decreasing the gap, reducing it to seven seconds. Bash and Cruse fought it out on the big uphill. Bash managed to hold of an aggressive Sherri Cruse as Mariana Balbi was finally able to get by Vanessa Florentino to pull in behind them.

By Lap Six, Gieger had shortened the gap to Patterson with only four seconds between them. She then reduced it to only a couple of bike lengths as they descended the big downhill with Gieger almost landing off the track in her aggressive pursuit. Gieger was unable to close the final gap however, as Patterson dug in and upped the pace, holding her off all the way to the checkered flag. At the finish line, it was Patterson, Geiger, Satchwell, Cruse, Bash, Balbi then Florentino, giving the overall win to Jessica Patterson with Tania Satchwell and Sheri Cruse in 2nd and 3rd.

A large crowd of excited spectators gathered around the podium as the women’s pro riders made their way up for interviews and trophy presentations. Champagne sprayed and teams and spectators enjoyed the post race celebrations in almost perfect weather.

With one race remaining in the championship, Jessica Patterson is 16 points ahead of Tarah Gieger, followed by Elizabeth Bash who is 39 points behind Gieger with Mariana Balbi and Tania Satchwell only 2 and 3 points behind Bash, respectively.

It all comes down to the last round to see if Patterson can hold on to the lead to take another championship. The last round will also decide who will take the 3rd, 4th and 5th positions. Girlyz racer, Alisa Nix, currently in sixth, was unable to race the second moto after giving it a try in moto one.

Nix dislocated her shoulder in the last round, taking her out of contention for the championship. The decision was made not to race and to try to return for the last race. This is a disappointing finish for the extremely competitive youngster who had some great battles and podiums this year, most recently winning the Mammoth Motocross race.

Don’t miss the final showdown at Steel City, Pennsylvania, August 25th. It is sure to be a memorable race as these brave women put it all on the line for WMA Championship finale.