WPSA Rookie of the Year on the Rise 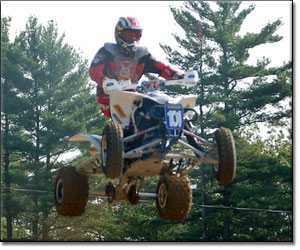 Keep a lookout for Nac’s Racing/Curtis Sparks sponsored pro-rider Rocco Arno Jr. this coming race season as this WPSA Rookie of the Year shows much promise.

Arno is dedicated, consistent and hungry to win. This past year on the WPSA tour he qualified and placed in all ten races which were televised on ESPN2.

In Indiana Arno got the holeshot and held pro-rider Doug Gust off for some time – all captured on Gust’s helmet cam. Arno got a taste of being out in front and he liked it a lot!

Rocco started racing amateur on local tracks near his New Jersey home and now is a regular at both the WPSA tour and the GNC series so look forward to seeing more of him in the coming race season.

This picture is of Arno catching some air when he visited the Nac’s Racing Crew at Capeway Rovers Motocross Track in Middleboro, Massachusetts during a NEATV race this past August.

Dirt Trax Onlinehttps://www.atvmag.com
Check back frequently for new content and follow us on social media!
Previous articleAut Solid Side Kit From Triton
Next article5 Tips for Successful Winching