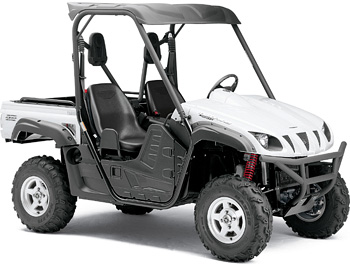 Yamaha’s leading Rhino continues to hold the top spot as the toughest, most off-road capable and versatile, as well as the all-time best selling, SxS vehicle.

Yamaha ignited unprecedented interest in SxS vehicles when it launched the first Rhino in 2003, and the Rhino line continues to be a category leader today.

Combining Yamaha quality and durability, the Rhino has received nearly every best-in-class award from the ATV and SxS world as well as hunting and farming communities because of its ability to tackle off-road terrain while also serving many utility functions.

For the 2011 model, Yamaha has given the Rhino a new steering wheel and adjustable seat belt providing more rider comfort in off-road conditions.

The 700-class powerplant is optimized for the Rhino with a liquid-cooled, four-valve SOHC engine providing plenty of torque to tackle rough terrain. Helping manage that power is the Yamaha Fuel Injection system with unmatched performance and dependability at high elevation and in cooler conditions.

Adding to the Rhino’s terrainability is the On-Command 2WD/4WD system with differential lock that gives the driver options with the push of a button.

The Rhino 700 FI has 12.1 inches of ground clearance, and its fully adjustable and fully independent front and rear dual A-arm suspension offers more than 7.3 inches of travel.

The Rhino also features large axles and CV joints to best accommodate its engine power. Front and rear A-arm guards prevent sticks and debris from getting to the boots, but should something find a way past the guards, the CV boot material is tough and resistant to most impacts.

When it comes to braking, the automotive-style pedal controls the four-wheel hydraulic disc brakes with dual piston calipers, which provide unmatched stopping power and feel. The parking brake lever is located on the center console and engages a separate disc brake located on the axle.

The Rhino 700 FI comes with a number of standard extras and creature comforts, and Yamaha offers more than 100 official and accessories for the Rhino line. As with all previous models, the 2011 Rhino features a U.S. OSHA and ISO 3471 compliant roll over protection structure (ROPS).

Its 12-volt accessory outlet easily receives a GPS device, spotlight or even a cell phone charger. The Rhino has padded bucket seats with headrests for both driver and passenger and a digital meter is standard on the Rhino 700 FI providing self diagnostic capabilities for easy troubleshooting, a voltage meter for monitoring battery condition, and an hour meter function that operates only while the engine is running for more accurate servicing.

The Rhino 700 FI also comes standard with passenger grab handles and cup holders, as well as tough, rotomolded doors to keep mud, water and trail debris out of the cab. Helping keep passengers clean and keeping cabin noise to a minimum is the noise and dust shield located behind the seats. The under-hood, tools-free air filter is another added convenience. It is a snap to service in its location and an optimized filter size helps the filter stay clean longer.

The 2011 Yamaha Rhino will be available in Hunter Green, Red and the Sport Edition White Armor in the summer of 2010.

Dirt Trax Onlinehttps://www.atvmag.com
Check back frequently for new content and follow us on social media!
Previous articlePolaris Announces 2010 Race Teams and Contingency
Next articleBorich and Yoshimura Ready to Dominate GNCC