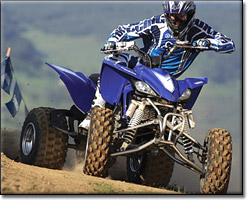 Bill Ballance cruised to a comfortable lead in Round 7 of the Grand National Cross Country ATV championship in Millfield, Ohio on Saturday, May 14.

The Yamaha YFZ450 pilot bested the next rider, Adam McGill, by some 20 seconds at the finish in the nearly two-hour event. Balance’s third win of the season vaulted him solidly into the points lead as his strongest rival, Chris Borich, could manage only 15th place overall.

Despite his generous margin of victory, the path to winning was anything but comfortable for Ballance. Copious rainfall in the days preceding the event left the track a mess, with mud holes waiting to trap riders and the gooey stuff literally inundating the machines. “The bikes had probably 200 pounds of mud on them. A lot of bikes were overheating but the Yamaha kept on going strong,” he said afterwards.

In fact, there were an impressive four YFZ450’s in the top 10 at the Ohio event, which was named for John Penton, the famous Ohio enduro rider of the 1960-70s.

Yamaha-mounted Chad Duvall charged hard to earn his spot in the top five while Jeffrey Vensel, a Junior rider, scored an impressive ninth overall and amateur Anthony Hill rounded out the top 10.

Dirt Trax Onlinehttps://www.atvmag.com
Check back frequently for new content and follow us on social media!
Previous articleEasier Access To All-Terrain Vehice Magazine
Next articleYuasa’s Got Juice!