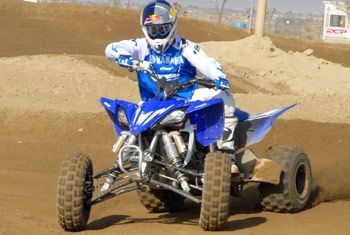 Nelson, who secured his 2008 title last month at Competitive Edge MX in Hesperia, Calif., will be the first person to race the all-new YFZ450R when the gates drop at Glen Helen this coming Sunday, November 30.

“This is an exciting weekend for Yamaha racing as we celebrate Dustin’s 2008 QuadCross championship and move into a new era with the all-new and highly-anticipated YFZ450R,” said Steve Nessl, Yamaha ATV/SxS marketing manager. “Nelson was very involved in the development of the new YFZ450R so it is only appropriate that he is the first person to race it.”

Yamaha plans to celebrate Nelson’s 2008 championship throughout the race day on Sunday.