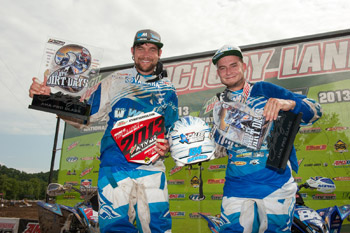 Finishing a very strong 2013 season, Yamaha’s Thomas Brown took his first ever AMA Pro ATV win atop his YFZ450R this past weekend at the 2013 season finale at Loretta Lynn’s Ranch in Hurricane Mills, Tenn.

Chad Wienen, who won his first AMA Pro ATV Championship aboard his YFZ450R last year, was second overall at the series finale after securing his second consecutive championship the previous round.

Racing a Yamaha YFZ450R in his sixth year with the team, Browns 3-1 moto finishes on August 10 gave him the top podium spot as well as locked second place overall in this years AMA Pro ATV Championship. Brown took eight podiums this year in total.

“It feels so great to wrap up this season with a win at Loretta Lynn’s and second in the championship. It’s by far my best year and Im looking forward on improving even more,” said Brown. “Plus, I’m pumped that Chad and I could go 1-2 in the championship and bring home another Manufacturer’s Cup for Yamaha!”

Wienen and his YFZ450R put together a 2-2 moto finish last weekend capping his second straight AMA Pro ATV championship title with his Wienen Motorsports team. Wienen locked in his title two weeks ago at the Red Bud MX facility. In all, Wienen took eight wins and 10 straight podiums in his second season racing for Yamaha.

“Our season finale at Loretta Lynn’s was an eventful one to say the least. I am very happy being part of two consecutive Manufacturer’s Cup wins with Yamaha and also backing that up with back-to-back Championships of my own,” said Wienen. “Track conditions where tough with the rain coming in Saturday morning, but it was no match for my YFZ450R and me, helping propel me to another podium finish.”

Yamaha continues to lead the sport ATV market in sales, championships and support. This year has seen extended trackside support for all ATV racers at each stop of the AMA ATV nationals.

Layne Barnes and Pro Motorsports from Mt. Pleasant, Iowa, have been supporting all of the events on behalf of Yamaha stocking replacement parts and providing technical assistance to riders on race days. Yamaha, the number one brand in sport ATVs, also supports racers in the Grand National Cross Country series, World Off-Road Championship Series and Yamaha Quad-X Series.

The Yamaha ATV Race Team will be riding the recently announced and new 2014 YFZ450R next year, which boasts power gains and improved handling and is now assembled in the U.S.A. at Yamahas manufacturing facility in Newnan, Georgia, for worldwide distribution.

Yamaha Motor Corporation, U.S.A., (YMUS) a leader in the motorsports market, makes the toughest, most capable and versatile ATV and Side-by-Side vehicles. The company’s ever-expanding product offerings also include motorcycles, outboard motors, personal watercraft, snowmobiles, boats, outdoor power equipment, accessories, apparel and much more. YMUS products are sold through a nationwide network of dealers in the United States. Headquartered in Cypress, Calif., since its incorporation in 1976, Yamaha also has facilities in Wisconsin and Georgia, as well as factory operations in Tennessee and Georgia.